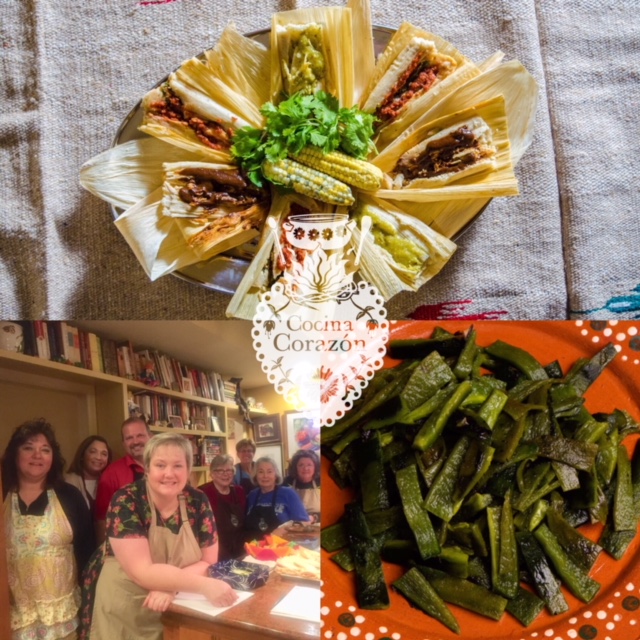 Tamales cooking class – Learn and enjoy the art of making this favorite delight!

In this class, we will make:

We will go through the whole tamal process – preparing the masa (using bare hands or gloves if preferred), preparing the corn husks, fixing the tamales by filling, folding and steaming.

Tamales are made with masa – a nixtamalized corn (hominy) dough – lard or rice bran oil (vegetarian option) and rich broth.

The word tamal comes from the Náhuatl tamalli that means envuelto (wrapped) – a legacy from the Aztecs and other Mesoamerican cultures to the world. Corn is the main ingredient. This grain is over four thousand years old and it is one of the most representative ingredients in Mexican cuisine.

This pre-hispanic delight has been documented by Fray Bernardino de Sahagún – a missionary priest who participated in the Catholic evangelization of colonial New Spain – as one of the ancient dishes of the Mexican culture, used in ritual activities as an offering for the dead. Many regions of Mexico still use tamales for their funeral rituals such as Día de Muertos (Day of the Dead), or for the independence celebration.

The concept of a tamal comes from the primitive idea of using the hand as a plate to wrap the food. Afterwards, plant leaves found in nature replaced the hand. Because of the abundance of the corn in the central regions and the banana leaves (plantain) in the southern regions, these two leaves became the most popular.

Tamales from Mexico City are typically wrapped in corn husks and filled with different meats and salsa, or fruits (for the sweet tamales) before being steamed. They are perfect for any kind of celebration, such as potlucks, holiday parties, or big family gatherings. GLUTEN-FREE!

To be called a genuine tamal, they must have four basic elements: Wrapped – in corn husks or banana leaves (plantain), Masa, protein filling (veggies or fruits for vegetarians) and Salsa